Skip to content
Hey friends! How are you doing? Did you have a good weekend? Saturday felt like we were in the thick of summer in Charlotte and then Sunday we found ourselves right back in spring. To be honest this flip-flopping from hot temperatures to cool, breezy days is giving me life right now! It’s like the perfect glimpse into summertime and water fun with some lovely reprieves from the heat in the mix. Can this be the pattern for the next three months, please?

To be completely honest, Saturday morning began on a heavy note for a myriad of reasons. I’ve been feeling so many things related to the murder of George Floyd and also unsure how to best proceed with addressing this on the blog. Not mentioning it here feels very wrong because it’s something I cannot stop thinking about so I am bringing it up to say I don’t know what to say other than to share that I know my feelings pale in comparison to the way black people feel and have felt for years and years. While I worry about using the wrong terms and inadvertently offending black men and women whom I desperately want to feel my support and concern myself with figuring out the best ways to grow myself and raise children who are anti-racist, black people worry about their lives. It’s horrible and must change.

I read a powerful quote from Naomi O’Brien last week that said, “If you’re trying to teach your kids to be anti-something, you need to be direct and intentional about exactly what it is you’re trying to teach them.” Her Instagram caption impacted me deeply and will shift the way I parent moving forward. Please take the time to read her words:

Saying, "Be nice." doesn't create a child that fights against racism, homophobia, xenophobia, islamophobia or anything else. You have to be intentional and direct. When we want our children to learn how to safely cross a street without us there to guide them, we don't just shout, "Be safe!" and hope for the best. We talk to them explicitly about slowly approaching the road. Looking and listening (if they are able) to the sights and sounds around them. We tell them to look left, then right, then left again just to be safe. We show them other kids who aren't being safe and talk to them about why they shouldn't be like that. And why? Because we fear what might happen if we don't. We fear the consequences of not properly preparing them to cross a street without us. We know that even if they are properly prepared, the worst might still happen. So, we talk to them over and over and over again. We correct them when they forget or aren't as careful as we told them to be. It isn't a one and done conversation. We need to be this intentional with all of our lessons. Especially when you aren't raising your kids alone. Society is co-parenting with you.

My boys are young — almost 2 and almost 5 — and while we’ve always tried to raise them to appreciate and celebrate the differences in others, the way I plan to discuss race with them as they continue to grow and mature will change. Conversations will be more direct, explicit, longer and ongoing. They’re conversations I’m having with myself right now as I continue to research ways to help, educate myself, LISTEN and learn from those sharing their stories and experiences and resources.

For those also looking for a path forward related to educating yourself and taking action against racism, this roundup from writer, lecturer and activist Rachel Cargle was helpful to me. And this list from The Key Bookstore + this image from artist Jane Mount includes lists of anti-racism books I hope will be of interest to many of you. I’m beginning with White Fragility by Robin DiAngelo.

We managed to make it out on the lake after a morning walk with Sadie on Saturday and I focused on the sun and the water and my family. Last week felt heavy in another way when I read about a beautiful three-year-old girl who passed away following a shocking cancer diagnosis back in April. It ripped my heart out and left me in tears numerous times throughout the week. I’ve thought about Stevie Lynn Stock over and over again and my heart aches so deeply for her family. Losing a child is every parent’s worst nightmare and it’s impossible to know what to say or do, especially when it affects a family I don’t directly know. Outside of donating to this family, I can only think they’d want me to love my babies and deeply appreciate my children and I thought of Stevie and precious children gone too soon over and over again this week as I played with my boys, held them close and tried to mother them with more patience and love. 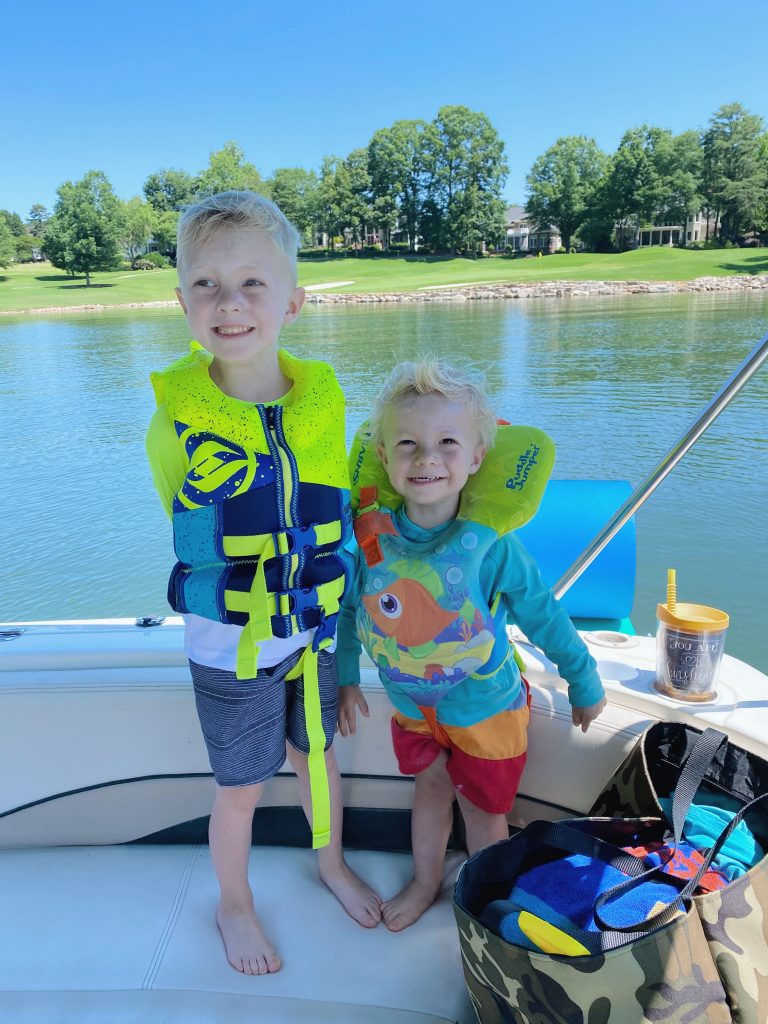 We spent several hours on the lake on Saturday and it was a bit of a milestone lake day for the boys for a few reasons. We switched Chase out of his puddle jumper and into a life jacket following his former ISR instructor’s recommendation and it was a huge success! (His instructor is not a fan of puddle jumpers for numerous reasons, including the restrictions they put on a child’s arms and the way they teach children to “run” in the water versus swim horizontally which she believes can inhibit the progress of ISR. She is still obviously a big proponent of water safety but prefers life jackets and recommended this Hyperlite life jacket for Chase and Ryder once Ryder reaches 33 pounds. In the meantime, this is the life jacket Ryder is wearing and it’s proven to be the infant life jacket both of our boys have tolerated best.) 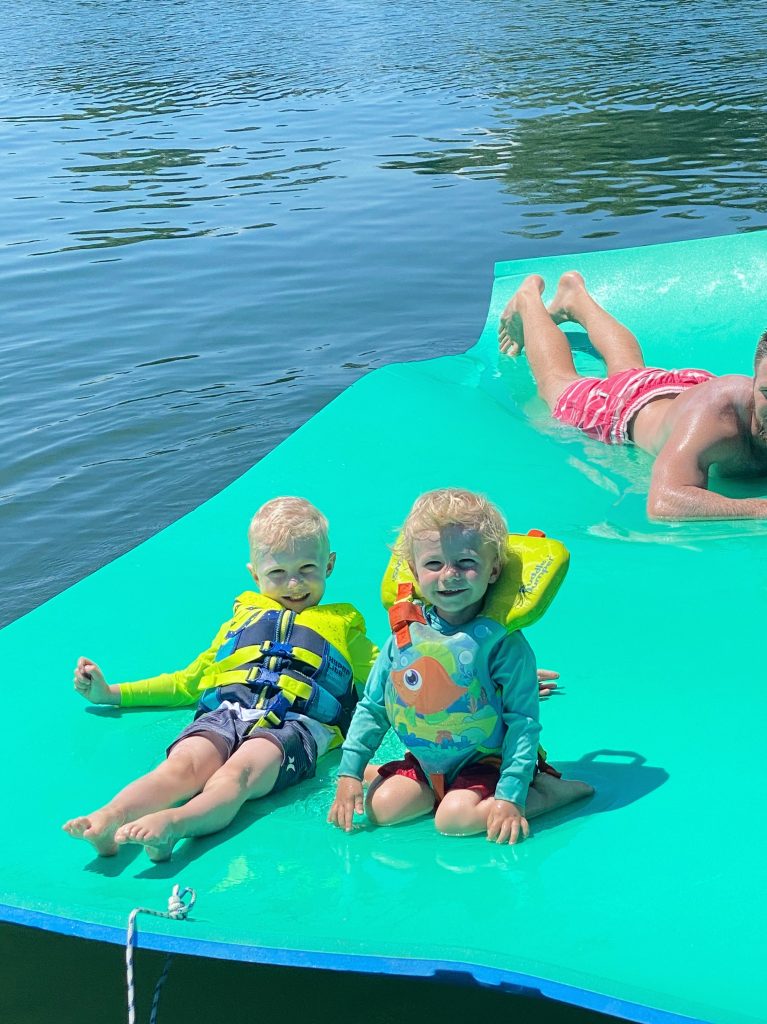 As for Ryder’s big milestone, he said he wanted to swim “by himself” in his life jacket where he couldn’t touch which was huge! He’s usually very clingy in deeper water so it was neat to see his confidence grow a bit. Seeing how proud he was of himself as he splashed around less than a foot away from me and Ryan even though he didn’t realize we had a hand on his life jacket the whole time was adorable.

Oh and this is Ryder’s “thumb’s up” sign which I think is just way too cute. He’ll figure it out eventually, I’m sure! 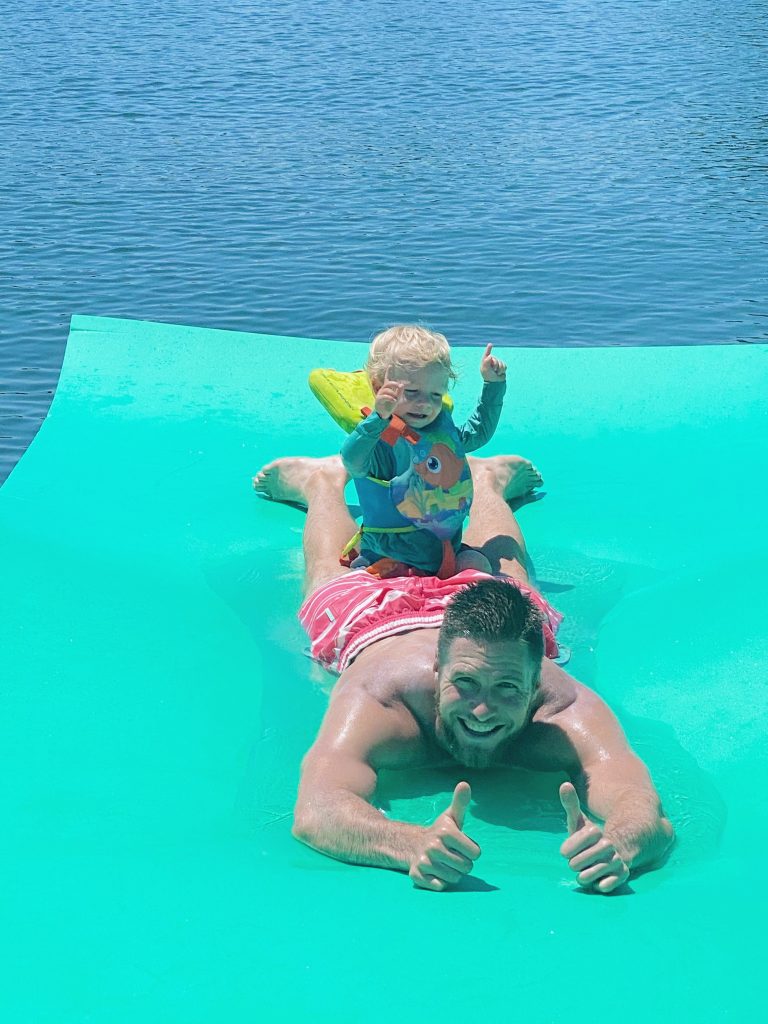 After our time on the water, we headed back home and put Ryder down for his nap just before it was time for the shuttle launch. Chase is obsessed with space (even more so since the discovery of his favorite space-themed kid’s podcast) and was SO into the countdown. 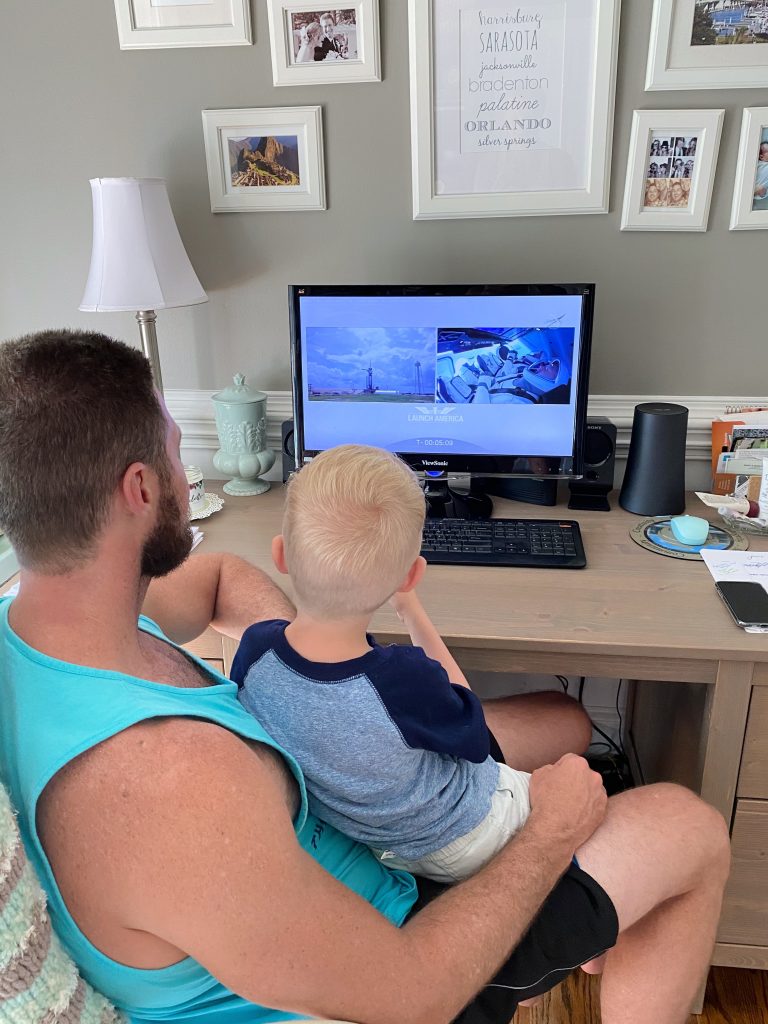 We watched the launch and the engines drop off and he was in absolute awe.

The rest of our Saturday included work on the computer for me while Ryder napped, yard work for Ryan and Chase (well, not really “work” for Chase), pizza for dinner, baths and early bed times all around.

After Saturday’s 85-degree temperatures, Sunday felt like a return to spring and we made the most of the mild weather and took the boys on a long walk on a local greenway. We actually drove to the neighborhood next to the apartment complex where Ryan and I first lived when we moved to the Charlotte area and did our old favorite walking route with the boys which was all kinds of nostalgic!

The walk took us to Birkdale Village where we ordered smoothies from Clean Juice to sip on while the boys played with the toys we packed in the stroller and raced Ryan across the grass approximately one million times. 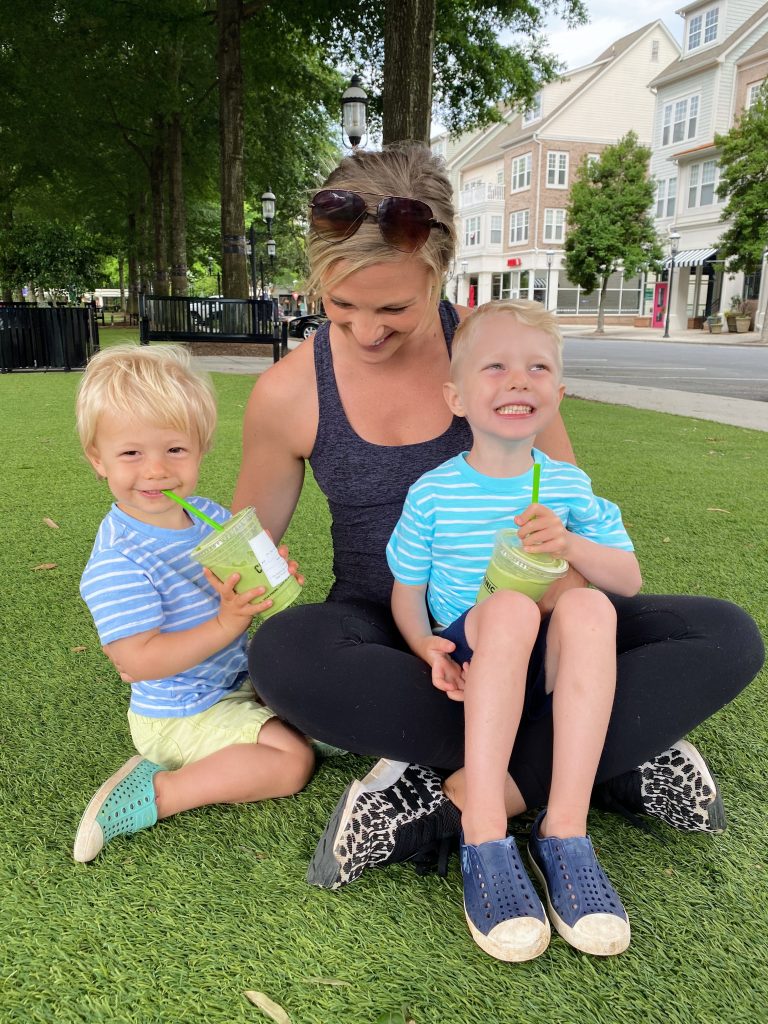 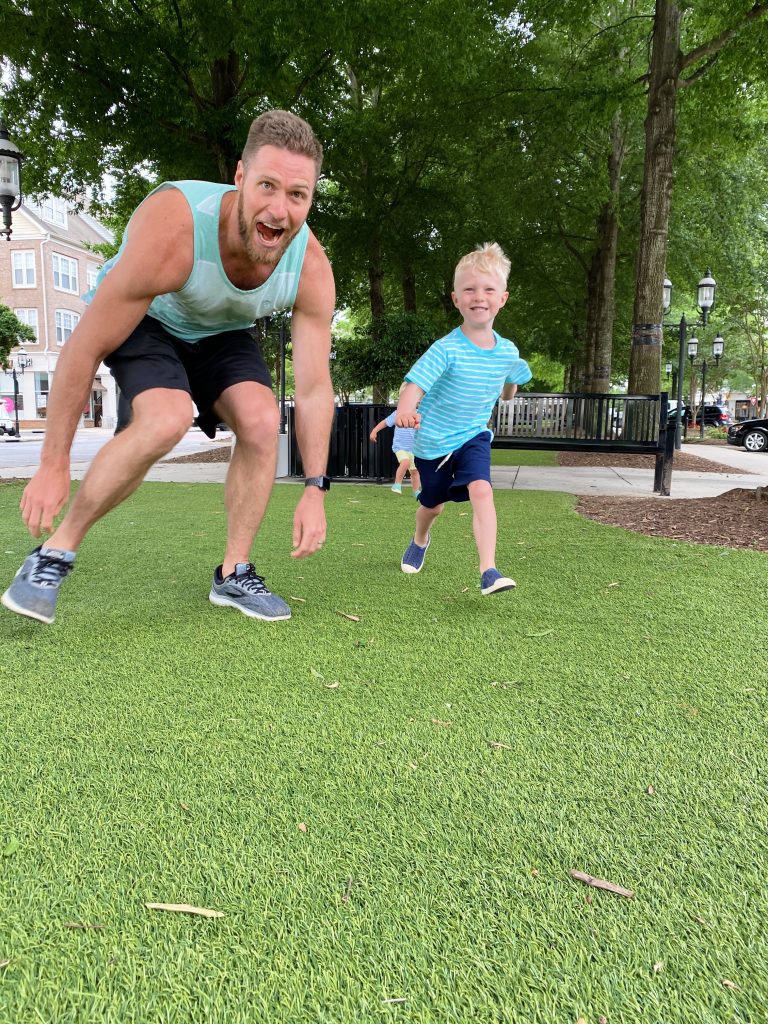 Oh and Ryan wasn’t the only one to get an at-home quarantine haircut! Last Thursday, I followed this tutorial that a bunch of you recommended to me via Instagram and cut Chase’s hair! 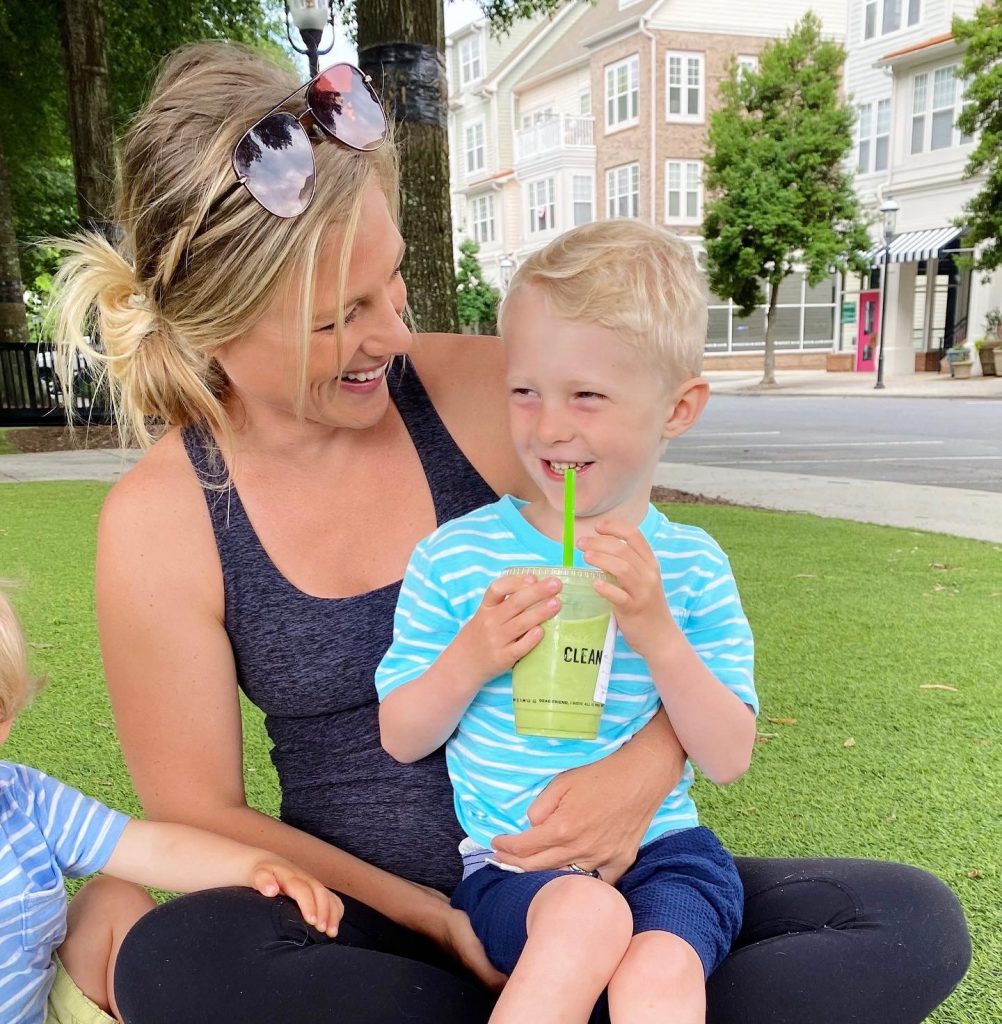 It turned out better than I expected… as long as you don’t look too closely at the sides. Ha!

We made it home around lunchtime and dug into sandwiches, mango slices and bell peppers before Ryder went down for his nap. I once again used Ryder’s nap time to work while Ryan and Chase spent more time outside (bless these weekend working windows because getting work done during the week right now is just plain HARD) and then we headed over to my friend Lauren’s house for some fun in her backyard. It was so, so nice to get together and round out our weekend with our families.

By the time we made it home, there wasn’t time for anything other than a quick bath for the boys and dinner before everyone was ready for bed. I began working on this blog post a bit before bed and then called it a night after reading until my eyes would no longer stay open.

As for the week ahead, we have a whole lot of the same old stuff on the agenda. I’m planning to share a glimpse into our weeknight meals from last week and hope to have a moment to type up a pregnancy recap with you guys since it’s been a hot second since I’ve shared anything and I’m almost in my third trimester. Time is flying!

I hope you all have a good Monday and, as always, appreciate you making my blog a part of your day!

The post A Glimpse Into Our Weekend appeared first on Peanut Butter Fingers. 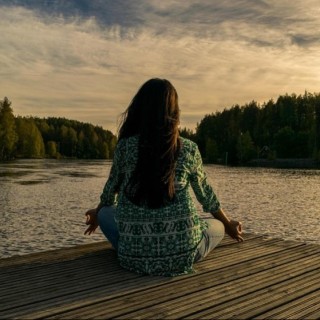